Showing posts from March, 2010
Show all

Stinging Trees - and a NEW Treatment for stings 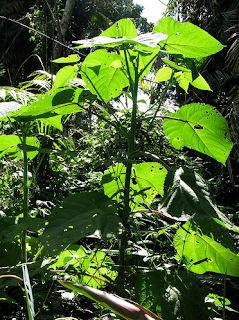 --> Stinging trees (Gympie-Gympie) are the bane of people in the Australian tropical and sub-tropical coastal areas - especially after disturbances such as cyclones, which trigger the germination of seeds. It becomes quite an issue when children wander into small plants - and are really badly stung.

There are four common species of Australian stinging trees. Two are large rainforest trees growing up to 30 to 35 m. The other two are really little more than bushes growing up to 3 or 4m tall but often seen as a shrub 0.1 to 1m tall. The sting inflicted by the smaller species are by far the most painful. The poison from the smaller species is the most virulent and because of their size people are more likely to blunder into them. All four are closely related and belong to the same family as the common stinging nettles. (Urticaceae). In Australia the common native nettle is Urtica inscisa.
The four variations of the Australian stinging trees are:
Giant Stinging …
27 comments
Read more